Back To All News Items

The physics students participated in the Show Us Your Coaster Contest at Elitch Gardens on May 11, 2017.  They spent time in and out of class late April and most of May to build a device that uses gravity to propel a marble down a track, a gravitational roller coaster.  There were thirteen coasters in the competition this year.  The competition requires teams of four or less, so this year we had two coasters entered from CIVA.  One had the theme of the solar system, which started spiraling around the Milky Way then passed through the center of the sun and past all eight planets before finally ending at Pluto.  They used stars to keep the marble on the track and named it “Shooting Comet” as a comet passes through the solar system somewhat like the track of the coaster.  The other’s theme was Journey to the Center of the Earth.  The marble began wondering its way toward the opening to the center of the earth that was a hole in the crust (or top of the coaster).  After passing through the hole, the marble did a loop-da-loop before heading through the skeleton of a T-rex.  They named this coaster “The Journey.”   Both teams worked extremely hard in creating their coasters and spent many, many hours in the process. The competition itself was both exciting and nerve wrecking.  Each coaster had three trials gaining twelve points per successful trial.  For the Shooting Comet the first trial was successful, but unfortunately, the next two trials did not make it up the hill following the loop-da-loop, an issue that was prevalent in the beginning of the coasters existence but had not been a problem after many adjustments since.  The Journey had a bit more success.  The first trial was successful with a time of 16 seconds, the second trial fell off the track, and the third trial was successful with a time of 17 seconds.

Team members of The Journey:  Connor, Julianna, and Natalie 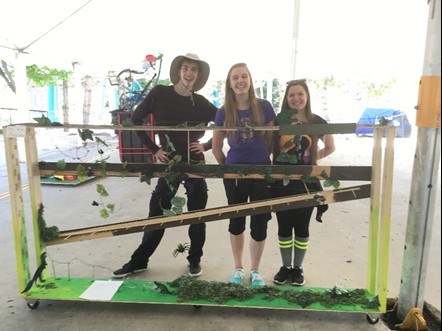 Team The Journey with their 1st place trophy 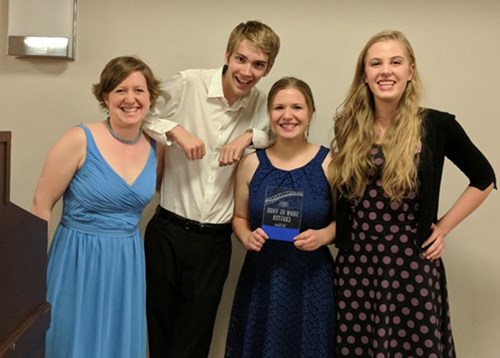